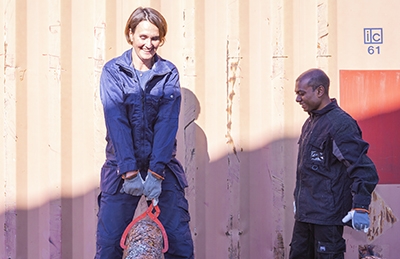 Professor Sylvia Larsson and PhD student Atanu Kumar Das, both of the Swedish University of Agricultural Sciences. Photo by Bio4Energy ©2022

Preparing sustainable and highly efficient biochars as electrodes remains a challenge for building green energy storage devices. Herein, biochars were prepared from Norway spruce bark and lignin powder to be tested as electrodes for supercapacitors. Spruce bark was subjected to Accelerated Solvent Extraction using solvents with different polarities. After that, extracted and non-extracted biochars were prepared via a facile and sustainable single-step pyrolysis method, using H3PO4 as a chemical activant, and the influence of extraction on the biochar properties and the electrochemical performance was evaluated.

Preliminary results indicate that the extraction process affected the biochars’ physical and chemical properties for their application as supercapacitors electrodes. The biochars from extracted bark exhibited lesser carbon, oxygen, and nitrogen contents and functionalities than pristine bark biochar. The bark biochar was tested as supercapacitor electrodes with a two-electrode system. The extracted bark biochars displayed lower electrochemical performance when compared to non-extracted bark. Therefore, we are currently performing further surface modifications with two organic moieties, which need to be tested in supercapacitors. We expect that the grafting of these two moieties can boost the electrochemical properties by both EDLC and, especially, due to the pseudocapacitance. Lignin powder was milled to smaller particles and pyrolyzed in a tube oven without any chemical activation. The lignin-based biochar was composed of carbon and oxygen, with minor sodium content. The lignin biochar was tested as supercapacitor electrodes with a three-electrode system.

Illustration of the steps of investigations, Bio4Energy ©2022.