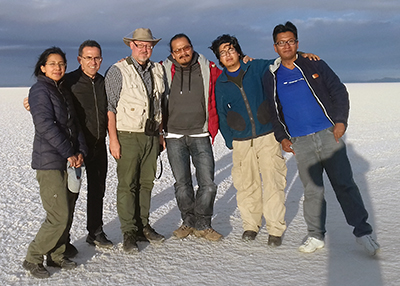 A long-running research project designed to create the conditions for making renewable fuels, chemicals and pesticides from residues of the agricultural crop quinoa; grown in extreme environments; has hit a major milestone.

Bio4Energy’s long-running ‘Quinoa Project’, started in 2017 by scientists in Sweden and Bolivia, not only has expanded to a multi-partner effort, but also has classified and provided a detailed map of characteristics of a previously unknown bacterium that can be at the base of high value-added biorefinery products.

This bacterium lives on the Andean Altiplano, or high-altitude plateau, of the great mountain range straddling Bolivia and a number of other South American countries. To protect itself from the intense sunlight and high salt concentration of its environment, it produces a type of polymer (a base component of many living organisms), which the scientists believe can be at the base of a number of high value-added biorefinery applications. It is this “exopolysaccharide” polymer that can become use products down the line.

“We believe that this type of polymer will be useful for producing products of high market value. We can think about applications such as fine chemicals, medical materials and food additives”, said Carlos Martín Medina, Umeå University; who shares the project leadership with Cristhian Carrasco of the Bolivian Universidad Mayor de San Andrés.

This means that scientists across the world who have the competence and access to infrastructure, with the classification of this bacterium, Bacillus atrophaeus, have the possibility to use the new research results for making bio-based applications from crops grown in extreme environments.

In Bolivia and other South American countries, a good part of the population are farmers who rely on the production of the protein-rich staple crop quinoa for their subsistence.

One the one hand, demand for this health food from the rest of the world has dwindled as importers such as the U.S.A. have turned to growing the crop domestically. On the other, important negative environmental consequences have sprung from the quinoa production, including depleted and contaminated soils, due to monoculture and use of fossil resource-based fertilizers, as well as a problematic amount of agricultural waste.

Several of the governments of South America see great promise in biorefinery. This means the production of fuels, chemicals and materials; using renewable starting materials such as organic waste, instead of fossil resources such as oil or gas.

However, methods and tools for converting agricultural residue, such as quinoa stalks, must be invented. Given the harsh environment of the high Altiplano—a salt flat situated at an altitude of 3000 – 4500 metre above sea level—the size of the task is great.

In a next step, researchers at Umeå University, Sweden will investigate which industries may benefit most from the present discovery. In other words, use applications will be identified.

The present project is a collaboration between scientists at Umeå University, Bolivian Universidad Mayor de San Andrés of Bolivia and consultant researchers at the RISE Research Institutes of Sweden.